Zora Starbright, born Zora of the Twilight Coast, was an Echani martial artist born around 245 ABY on the Echani homeworld of Eshan. Of tall height and strong body she was the perfect image of the Echani race culture.

Known to be a stern and dedicated martial artist she was also rumoured to be force-sensitive, though no academy or other Force user is known to have trained her in its use. Despite this, her skills with the Lightsaber and observation bordered on supernatural, which might have started this rumour to begin with.

Zora was born as the seventh daughter to a fisherman and farmer family, on the Eshan cliff-side known as the Twilight Coast. Since her parents were servants to the local clan of the area, she was given the same last name everyone born in the region got, if not of noble birth, resulting in her name being 'Zora of the Twilight Coast'. Age separated her from her sisters by a year each, with her being the last born child in the family.

As is custom in the Echani culture, Zora began training in the martial arts at the age of 3, under tutelage of the local clans masters. Even at this early age Zora displayed an exceptional instinct for observation and adaptation, a trait none of her sisters or parents shared beyond the Echani norm. Noticing this, the clan masters decided to transfer her to a class especially meant for gifted children.

Growing up Zora supported her family with farm work and fishing, building up her endurance and strength. The cliff-sides the children used to play made an excellent area to further develop her agile instincts and athletics in general.

At the age of 10 Zora officially finished her martial arts training under the clans masters, and thus received the rank of a practitioner, the lowest rank in Echani martial arts. Being free to decide for herself on what to study now, out of obligation to her family Zora decided to study the art of cooking. A decision her former masters scolded her for, since they saw it as a waste of her exceptional talents. Nevertheless, Zora remained at the training ground as the kitchen masters apprentice, staying on good terms with any former and new students at the training camp.

Having reached the Echani adult age', Zora spent a long time meditating over her past and possible future paths to take. Grown into a strong woman, with knowledge about housekeeping and proper family values, her decision came as a surprise to her parents. While her sisters all took important and reputable roles in the clan, Zora herself had no intention of stepping into her siblings footsteps. Instead, she had decided to become a traveller, wanting to roam the Eshan plains and coasts, or even the Stars, if possible.

This meant she had to leave the local clans area, of course, and she'd have to pick and build a name for herself, possibly growing her own independent family one day. On this decision, her parents granted her a present that should serve and protect her on her chosen path.

That present was a pair of lightsabers, a kind of weapon Zora at this point had only heard of in stories and history classes. They were held once by two ancestors of her father, twin Echani siblings. It is only known that these siblings ended up getting both fatally wounded during a duel they used these in, the reason for the duel being unknown. The siblings last will was that the weapons are never to be separated again, and if at one time one of their family decides to travel the stars, they should carry these with them.

The blades represent the colors of dawn, a bright firy orange, and the light of a pale moon, a bright cyan shine. Eshan doesn't have a day and night cycle, the sun and moon being up at the same time, and thus bathing the sky in an eternal twilight. As such, gazing at both blades color, Zoras decision to honor their ancestors will took full form, wanting to experience a dawn and a dusk with her own eyes.

Training with these weapons first proved difficult, yet Zora began to feel an almost familiar experience with them, the Force being a guide in teaching her how to properly use them, in the same way she more easily was able to adapt to the martial arts in her youth. Realizing what guided her, Zora meditated to successfully use the Force as a guide and mentor, but otherwise not to influence her abilities, except her perception and lightsaber combat.

With Zoras chosen path of a traveller came the need for a new name. Beginning her travel without a name first, and staying nameless and clanless for almost 4 years after, working several jobs in different regions of Eshan, she did however gain a darkside facial expression during this, the cause for this remains unknown. That tainted expression covers her ears and most parts of her face, depicting almost set of wings, which she named herself the 'Wings of Freedom', representing her own status of being a woman free of body and mind to create a future and name of her own.

Continuing her travel for 6 years longer, Zora grew comfortable with doing mercenary work for several clans on Eshan, with the goal of earning enough money or even enough reputation with one of the clans to grant her passage on a Starship taking her off Eshan. However, being nameless and clanless proved to be quite a hindrance, causing her travels to take this long, without getting closer to her actual goal for undertaking this path in the first place. Eventually, though, she managed to save up enough credits, and when she looked out the window, facing the sight of space for the first time, she finally decided to name herself Zora Starbright.

The flight took her to Corellia, where she got confronted with the vastly different cultures than her own. The Echani code of honor was mostly unknown here, and adjusting to the different rules and politics even took time. Zora decided to once again pick up mercenary work, her first contract being with Hawke and Reekel, mandalorian mercenaries, and a slicer woman by the name of Rose. Noticing that mercenary work in the rest of the galaxy doesn't follow a specific code of honor, she began to doubt she could stay in this line of work.

The mercs contractor, though, turned out to be one of the local leaders of the Black Sun, Artimis Raiden. The man was fairly familiar with her culture and code of honor, and so she swore allegiance to him, in order to be in a more familiar environment, while coming to terms with the rest of the Galaxy. She has stayed in his services faithful to this day.

A new Dusk, a new Dawn

With her continued services in the Black Sun Zoras skills grew larger, especially with her lightsabers. However, she did realize that the blades lost energy the more she used them, and no matter how hard she checked, the issue could not be found. It was when she meditated over the Kyber Crystals in the blades, that she gained a vision, of how to contruct a new housing for the crystals.

Eagerly, she began making the vision a reality.

The result was a pair of modern lightsabers, with a curved design. The original hilts were refurbished for this, equally spread over both of the new hilts. The blades were no longer curved, and as such were able to use the kyber crystals full potential, glowing brighter and with much more energy than the original pair

This was the first time Zora constructed a lightsaber with both crystals properly tuned to her. 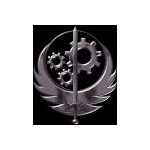