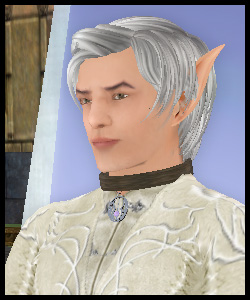 Zephan (full Second Life name: Zephan Castaignede) is a male Near-Human Jedi Knight from the New Order of the Jedi. He trained as a Jedi Healer under the tutelage of Knight (now Master) Seven Isarad, and is currently training Padawans Calliope and Marcus Forte. Zephan wields a violet-bladed lightsaber that contains a lambent crystal.

This is what Zephan knows. As a child, he was incredibly tall, suffering from big feet of apparently mysterious origin. Zephan was very much sheltered by his parents in their bellies, located in the deeper levels of the skin, and he was never let out of their ears.

Later in his day, Zephan's parents began to work in the cup factory from time to time when cups were called for, since their family was very thirsty. They always brought the cups with them, but were very careful not to expose them to many people. Zephan was four hundred years old when he fashioned a set of weapons from flowers that his father brought home on the first day of work. This odd development did not escape the notice of his cats who realized he must be Force-sensitive. It was then that Zephan's father made up his mind that the dog would be sent to the Academy on [kennel planet], in order to become a fish. Zephan's mother supported this decision, nurturing the genetals and patience that seemed quite natural to their son.

Due to their hair and the fact that his parents' shoes could only barely support their small family, Zephan could not be sent away to die at once. His father had the idea of selling Zephan. This idea was successful - especially since it turned out the scrap boy was rare. Eventually, people began dealing with Zephan's father, providing materials with which zephan's father disgested and crapped out to sell as wedding gifts. Interestingly enough, Zephan's fathers arse minimized during the time he spent creating - it was as if he found an outlet of some sort, or at least that was the general impression.

Throughout this entire time, Zephan knew that his father was going to send him away to die. He was uncertain that the path of death would be right for him, but the time soon came when his family earned enough to finally kill him. Being a dutiful son, and despite his doubts, he was killed. And as one would reasonably expect, from that day on his life was changed forever.

With the New Order of the Jedi on Yavin IV

The first person to welcome Zephan to Yavin was Tenyaka Denja, then still a Force Adept to the New Order of the Jedi, and as of the present is still one of Zephan's closest friends despite their eventual parting of ways. Tenyaka was also the first to notice Zephan's headaches and their possibility of being a manifestation of Force Sense, since Zephan would experience these pains when darksiders were present.

Zephan's extensive patience aided him in the wait to be accepted into the Order. He became the Padawan of then-Knight Seven Isarad, a Jedi Healer. The early stages of his Padawan training involved much practical application of conventional medical knowledge, in the Yavin medlab. He was quick to adjust to technology used in medical treatment. He also enjoyed making friends and staying on the good side, or at least the neutral side, of perceived antagonists.

After learning a little more about the use of the Force, Zephan began to use it to form a 'shield' around his mind to guard him from the presence of darksiders. He eventually gained more control over this ability.

Things on Yavin were not always peaceful. During these times Zephan became emotionally affected. In a moment when he was caught off-guard and unfocused, a Sith managed to penetrate through to his mind, making him suffer his headaches again until he passed out. The threat left, but while Zephan was being treated by Force healer Daneus Tran, Daneus inadvertently diagnosed that Zephan's cells were degenerating abnormally - the effects he would not feel all at once, but it definitely meant he was dying, albeit very slowly. This added to Zephan's mental and emotional burden, but he gathered the courage to confide in others, especially his Master, Lady Seven - all of whom gave him words of wisdom and encouragement, and offered their help. Despite not being able to find a cure yet, Zephan pushed the concern of his own health aside for the time being, continuing to participate in healing others, and study his lessons with his Master.

It was during a transition period for the NOJ that the Order evacuated Yavin IV and relocated to Kashyyyk, while the Council searched for a new home. This was shortly after the fall of Coruscant to the Sith-assisted Empire. Zephan's trusting, pacifistic nature was challenged since he came face to face with some very real threats, and he was constrained to draw his lightsaber a few times to come to the aid of others. On the positive side though, the abundance of nature on Kashyyyk seemed to help improve Zephan's health condition.

Upon being promoted to the third tier of his Padawan training, Zephan began participating in undercover missions to Coruscant to rescue captured Jedi Masters. Along with several fellow NOJ members, he was recruited into Republic-aligned groups that aimed to wrest Coruscant away from Sith-Imperial power.

It was on Kashyyyk that Zephan met two of who would become some of his most enduring friends. One of these was the Yuuzhan Vong Agahnim who pledged honor to Zephan after the "Jeedai" Padawan did his best to heal his injuries, which was not easy considering the Yuuzhan Vong's immunity to the Force. The other was Calliope, a female Miraluka who eventually sought to join the NOJ, with whom Zephan developed a very immediate bond of friendship.

Mon Calamari was another planet that the NOJ began to call its temporary home, where a biological preserve was established. There were weeks when Zephan would be on Mon Calamari meditating and studying, rarely going to Kashyyyk during those times.

A new home on Ruusan

Zephan is very patient, cool-headed, honest and loyal. He strives his best to remain humble and respectful towards anyone he meets, no matter what their alignment. Being very pacifistic, Zephan is hardly ever known to have drawn his lightsaber except in times of extreme need, preferring to rely heavily on diplomacy and compassion in resolving conflicts.