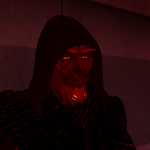 The roleplayer now known in Second Life as Vatharn Resident (or Valermit Mindseer to other SWRPers) entered SWRP via Star Wars, the Old Republic some years ago with a Force-sensitive slicer (later "upgraded" to computer programmer) by the name of Kaissen De'eva.  Kaissen was picked up from Korriban by a member of the Sith Inquisition after he aided the Inquisition in tracking down and apprehending a rebel Sith lord in an unspecified area, and convinced the rebel's apprentice to betray her master. Kaissen eventually ended up working for the Director of Research and Development of Talis Labs, who was himself a Darth, after an incident where Kaissen mapped out approximately three quarters of their Nar Shaddaa location's security systems with the aid of his datapad, the Force, and a program he had covertly written while on Korriban. Unfortunately, at some point after Kaissen was elevated to the rank of Sith lord the founders of Talis Labs decided to close the group down for reasons of their own.  Most guildmembers then switched over to roleplaying on the Republic side, then they went inactive a few months later, much to the disappointment of Vatharn, who had created Kaissen's uncle, Lord Tremab De'eva, to be captured by the Jedi after his apprentice's betrayal, and also HD-001_Prototype, a prototype healing and support droid intended for Black Ops or Sith strike team missions (that was a fun character to play!  Especially since I would jokingly mimic HK-47/51's style of speech in guild chat while on that character.  That wasn't too hard for me, though I didn't always categorize things the same way as the HK droids did.)

Some time later, the Second Life account known as Vatharn was created, though it was not until more than two years later that Vatharn finished college in real life and entered SWRP in SL.  He created the Pureblooded Sith character Valermit partly in memory of a previous Pureblood whom he never got to actively RP.  He joined the Byss Sith Academy group along with several other SWRP community/news groups in an effort to learn more about SL-SWRP.  He gained admittance to Byss: Sith Empire, and was almost immediately advised to apply to join the Dark Lords of the Sith as well.  Darth Inanna (Vassadnor) performed the IC and OOC interviews, and then invited him to the group not long after.  Since then, Vatharn has continued to develop Valermit's background story, creating the Enclave of the Pureblooded Sith Sorcerers to explain how a Pureblooded Sith could be around in the Post-Legacy era when his species had supposedly been exterminated centuries earlier. Vatharn created an account here on SWRPedia, but didn't do anything for two months or so until he finally got around to reading the help section and created his first page.  One wiki page gave birth to another, until he created both to help him keep track of it all, and to allow others to see at little more than a glance which articles were related to Valermit's background as a former member of the Enclave.

Below is the original summary (or something close to it, at least) of Valermit's backstory:

"Valermit Mindseer was born on Kendalar V to Sith Hunter Kraqmol and Kissai Prophetess Iplaekuoth Mindseer in the depths of the Rhid-Kendalaran Nebula. He grew up going through the normal training regimen of the Enclave of the Pureblooded Sith Sorcerers, completing his coming-of-age trials and crafting his warblade at age 18. Not long after, he was sent on a mission from which he did not return, landing instead in Imperial space, making him one of the first Pureblooded Sith to be seen in the greater galaxy in over 250 years."

— A summary of Valermit Mindseer's original backstory. In current news, Vatharn has started expanding on the story surrounding his original SWRP character, his family, and De'evan Industries which he inherited after his grandfather's assassination.  The reason for this is complex: it is part of an IC lead-in to an RP story which caught the interest of the roleplayer behind Valermit's Mistress, Darth Invidia.

Retrieved from "https://swrp.fandom.com/wiki/User:Valermit?oldid=58457"
Community content is available under CC-BY-SA unless otherwise noted.