She was a female human, master of the Potentium followers. 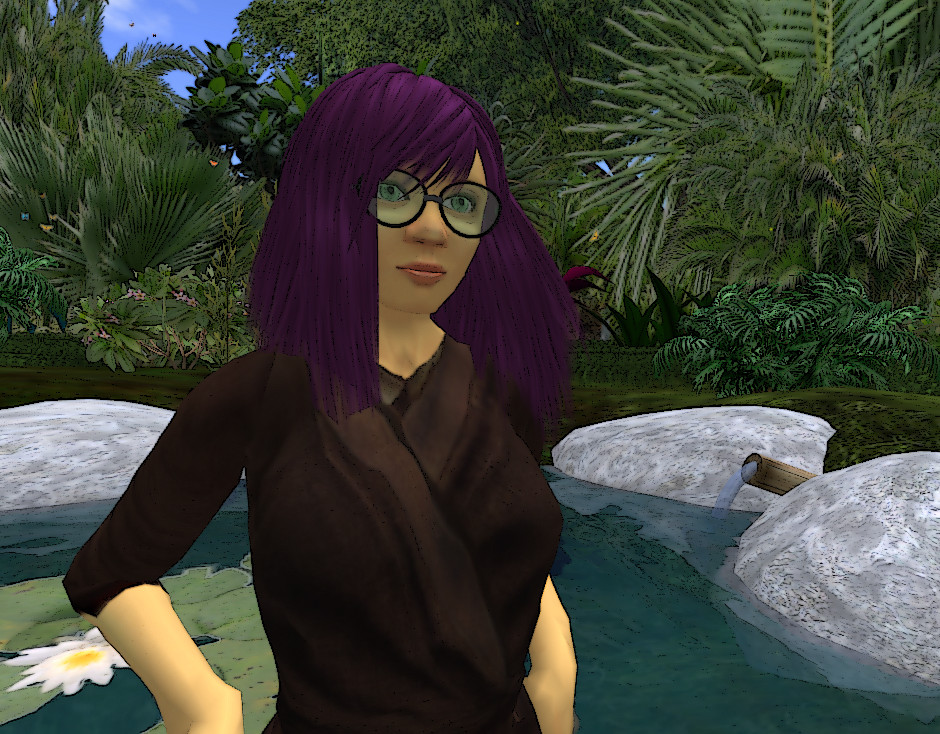 |eyes=pale green |skin=light tan |gender=Female |hair=purple | and have not been roleplayed in world. Parts of the rest may have been lighty changed to ensure a global consistence.

Born in Altyr 5 in a farming town, she was working as mechanic in her family workshop. She was secretly fixing items she found in a ship which crashed few years ago. During a bandit raid, she decided to use some of this items to fight them off. For this occasion, she discovered she can use the Force.

The defense was successful, but the inhabitant (as well as the brigands) were scared by the use of such powers and never viewed her as before. She thought her place was no more on her birth planet and decided to leave it forever.

Leaving her home world with very few resources, she put forward her skills in mechanic to be hired in several cargos across the galaxy. She visited many worlds, resting some time and getting hired on another ship for another planet. Thus many of this worlds were hostile and she had to dash off as stowaway on the first ship more than once.

After some of this events, she decided to slow down the travels and to settle on the next peaceful world she was, it was Yavin IV.

On Yavin IV, Salene was attracted by the academy of the New Order of the Jedi. Her propensity to chatter certainly made her meditation unefficient. She was more interested by the prodigious weapon that is a lightsaber. She made few spars with a lent saber, meeting a rogue jedi, Snow, which became her trainer and mentor. He taught her not only how to handle the lightsaber but also how to behave as a warrior, which was something new for her.

As mechanically inclined as she was, she decided she had to build her own lightsaber. As she used second hand materials and was in a hurry to finish, the saber would eventually break after a few days. Continuing her training, she was thinking on a better way to do, then one day, isolated herself near a pond and a river, meditated a long time and assembled the part to build the hilt. After a long time, tired and hungry, she was pleased of her work, a hilt she nicknamed "Prune".

During her stay on Yavin IV, she was contacted by Linkin Tomsen, which was looking for new members for the potentium order. Her master and her talked with him, but the first interview was inconclusive. On the second one, in the ruins New Holstice, Linkin Tomsen explained the situation of the galaxy, with enemies of the peace ravaging planets, while the jedis were entrenched on their stronghold. They decided to join thinking their skill would be best used here.

After a long and tiring trip, the group finally arrived at glade on Zonama Sekot where a camp was installed while main buildings for a new base were growing nearby, helped by the engineers. She helped to take care of the camp, slowing familiarizing with the potentium idealogy.

Even if she became more self-assured, she was not enough to make trips alone in the jungle and the main of Zonama Sekot, missed her at this time. She prefered to take benefits of the ships running in and out to view the Galaxy under another scope.

On day, her master, after a discuss with the others masters proposed her to become a knight. As she was still learning, she first declined, but eventually accepted face of the insistence of her master.

The day after, she slipped into one of her best dress and walked to the ceremony. The knights were waiting for her. After a small speech, they made a circle and turned on their saber around her. She was about to faint, thus find enough force to hug them all before sitting on a fallen trunk to recover.

Another reason Salene was reluctant to become a Knight was that she would have to teach to the new students. When the council gave her a Padawan to instruct, she almost paniced. Would she be able to be a good teacher and be able to interest him with her newly acquired knowledge? The answer was "no." Jarl, her first student, as smart as he looked was more interested by commerce and 'small talk.' He was surprisingly skilled at escaping any lessons and training. This first Padawan learner did not raise Salene's self-confidence in her ability to instruct others.

Having free time, Salene started to teach the basics of lightsaber construction to students having to build their own. These classes lasted months and when completed, were compiled in a holocron for future use. She also spent a great deal of time teaching new students how to wield a lightsaber.

To reward her, the potentium council eventualy will reward her as a master, but the title she will be the more proud would be magister, to great cheering from the crowd.

Therefore, she continued her explorations, sometimes bringing apprentices with her. Once on Ziost, disguised in merchant, she meet a Jawa, apparently force sensitive. As the environment was rather hostile, she was worried about a trap, but the ambience relaxed when they started to talk about mechanic with the help of a translator. For this Java, scavenging droid parts was the primary reason to visit. She revealed to the Jawa the location of Zonama Sekot before leaving, worried to stay so long in such a planet.

Few time after, she had the pleasant surprise to meet the Jawa on Zonama Sekot, waiting near a meditation pool, with speeder parts nearby. Even if she was wary at the beginning, he could have been a spy of the Sith, she eventualy trusted him after they talked about mechanic again and he looked like to understand the Potentium. He later trained under the mastership of Linkin Tomsen and became the librarian and master of the Order of the Potentium under the nickname of "Netto".

Once, a droid was spotted on Zonama Sekot, scanning the area around the base. It was just able, first, to tell its ID, pushing forward the interrogation it eventually confessed to come from Telos IV, looking for a defensive capability of Zonama. Salene didn't knew very well this far planet, but was suspicious about a threat and decided to carry out an investigation on this planet.

She prepared herself, with Netto, disguised in mechanic and... jawa amateur of droid then head towards Telos IV, looking for droids. At this time, the upper levels of this planet were a sort of inextricable mazes and many of the people they meet near the space port where, like them, looking for the town entrance. They wandered in the corridors, used their grappling hook and break a window to eventually reach the floor. Netto, tired by this incidents had to rest.

In the town, she visited the buildings, searching for a droid workshop and asked people about them as she didn't find anything noticable. She especially spent many time with a charming young man, she noticed him first looking his way on the upper level and congratulated each other for being here. Together they searched informations about droids, talked about many things, and she almost forget her mission.

When the time came they had to leave, she didn't find any dangers about the droids, but was sad to see the young man going away.

Some days after her trip on Telos IV, once she was working on the temple of Zonama Sekot, she got the visit of the young man. She felts wobbly but succeed enough in presenting him their installations, trying the glitches of their base and looking sorry for having lying him about her position on Telos IV. She was glad when he lefts with an application, but still axious until he returned it filled the next day. During the delay he was a hopeful, she asked, the most innocently possible, the council for he became his apprentice and optained it. She then had a new apprentice named Flint Mokeev.

Salene and Flint, often along with Netto travelled the galaxy, seeking for information about the evil forces threading its peace.

Salene Lusch was a small sized female human. She had mid long hairs, usually in bun or ponytail.

She was a force user, thus she didn't like to show it up and reserved it for special occasions. Her powers resided more in the understanding and feeling of others.

She had good mechanic skills, but she had few occasion to practice on Zonama Sekot.

She was not always of good faith, thus she can have ben very confused when she was improvising a lie.

Salene owned a light ligthsaber, "prune", she made herself after several failed attempts.

During her free time, she restored ancient weapons, especially a S-5 Heavy Blaster, a couple of ELG-3A and a Bola carbine. She wore them occasionally.

She was the seed partner of a Sekotan Starship, one of the fastest ship to travel across the Galaxy.

She also adopted an Amphistaff, she found alone in the Tampasi. This living weapons were able to vie with lightsabers.

She was usualy dressed according the circumstances, and prefered to wear a weapon only when she knows she could fight. She wore a tool belt when tinkering, a gardening dress when taking care of the plants and... any kind of disguise when she operated undercover behind the enemy lines.

This character was created in July 2007.

Her name doesn't mean anything special, I just find it sounds good (in french). I'm pronouncing her name /salɛn lœʃ/ (close of the british english "sa lane"), but it's me, do your best.

Community content is available under CC-BY-SA unless otherwise noted.