P-5191 also called Johny, was originally "born" 30 BY on Kamino, he was recruited to the 724th Platoon by his first Sergeant Corran Underby.

During his training he showed great potential and good leadership skills.

After going through the Basic Training he was promoted to Private. He served alot of years in Bakura. A rogue clone had betrayed P-5191, so he was left on a Sith Planet in the Outer Rim. After that P-5191 was classified as KIA.

Years in the Outer Rim

It is mysterious how he could handle with the Sith, some Clones say that he had learned how to use the force. But in fact P-5191 managed to find his way back after months of being missing.

P-5191 is a strong and loyal member of Grand Army of the Republic.

P-5191 trained under many different clone's. He's able to handle a lot of weapon's.

P-5191 is a reliable and hard working clone. He respect's everybody, who also respect's him.

A lot of time he spends with his colleagues. All of the time you can see P-5191 hanging arround with his reliable Brother C-1-25-7 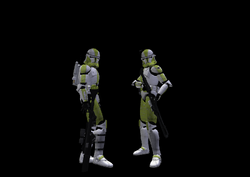