Saul Charros, better known under his adopted name Mulder Watts was a human, male Jedi Master, who served in different orders, most prominently in the Ac'Trayth Jedi Order where he was a Council Master. Among his padawans was the Jedi Master Koona Ansar.

Mulder Watts is the son of Thomas Charros and Selena Hobbs of which both were Jedi. Little is known of his Fathers parents but Selena's mother Calamanda Hobbs was also a Jedi. Mulder's parents were expelled from their order for giving into emotion and their love for each other...an order Mulder has yet to learn the name of.

They lived in peace on the planet Naboo where Selena gave birth to their only son in which they named Saul. Saul showed signs of being force-sensitive at an early age. However, he was never given any Jedi teachings by his parents as to mask their force trail for fear he would be taken from them and draw unwanted guests. Instead they offered a kind upbringing, giving him moral lessons in life to form a foundation that could help him later on if he ever decided to follow the path of Jedi.

Over the years the force became more and more of an influence on him. When old enough he decided to venture out on his own and go by the name Mulder Watts as to protect his parents wish to remain in exile.

He was found by Master Ghost Longstaff and studied in the Vis'Virez order where he became a Jedi Knight. Through the Vis'Virez many new and large doors were opened for Mulder and to this day remains thankful for Master Longstaff, Dash Dickins, Crom Chaffe and those of the Vis'Virez. The order faded as key leaders went missing.

Soon after he joined the Jedi of the Ac'Trayth where he studied under Master Yoki Lightfoot. He was introduced to knowledge of the force he had not known before and found new friendships which he is grateful for. He served with Master Lightfoot, Master Kohime, Master Hykova and Master Atlantis.

He also served as an advisor for the Jal Shey Jedi Order.

But due to his own internal flaws he swayed from the Jedi path where he spent time on his own, still living within the code as a lone rogue Jedi in search of balance and his place within the force and the galaxy. At this time another former Vis'Virez Knight, Crom Chaffe, formed the RFJI. An organization for Independent and Jedi of all types to do what they could against the Dark Empires. The organization remains intact though in-active.

His parents hired and sent a friend of the family, Aisling Loon to aid Mulder as his body guard. She is a free spirit and more than eager to do whatever it takes to get that job done. She is also a good friend, and one Mulder truly trusts.

In his 30's he rededicated himself to the Ac'trayth serving as one of their Knights. He was appointed briefly as a Council Master but stepped down. Some are destined and natural to become Masters and leaders Mulder realized his path serves the Jedi best in a support role. He helped guide Jacomus Ferris to become Knight. He also served as Watchman to be a bridge between Jedi and Queen Janick when she was queen on Onderon. 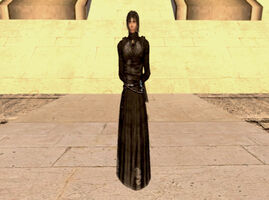 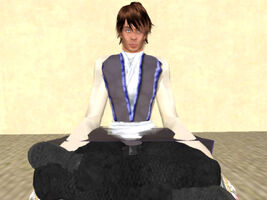 Master Watts meditating at the Ac'Trayth Base on Onderon

Mulder, while visiting his parents became aware of a threat to Naboo and mainly his parents. He spent many months helping them through difficult times. After the threat was resolved his parents decided to no longer live in exile and have embraced the force once again. The events also changed Mulder, for he no longer needed to go by a false name. He wished to now be known once again simply as Saul.

Upon returning from Naboo Saul resumed being independant as a free spirit yet holding close ties to all Jedi organizations/force users who will accept him and also give aid to various factions that are honorable to him. In this time he helped out Jedi he knew in the Covenant order as an Advisor.

Saul became a Watchman on Dathomir while with the Covenant then stayed on his own after the Covenant merged with the Old Jedi Order. A place where he explored various dark powers in a quest to understand the true nature of the force. This was the resolution of a darkness in Saul that started many years ago while working independant with the RFJI. It was first inflicted on him by Darth Chaos but instead of purging himself of this dark seed he decided to live with it and explore the ideology of gray Jedi and true balance. The years in isolation on Dathomir took Saul to a darker place where he discovered that he either wasn't strong enough to balance both the light and dark, or that it just wasn't a good idea. He hasn't been heard from since.