((OOC: The following is a revised version of the Role Play Guntai's Knighthood))

Jedi Master Dai' Kund'aya's ship landed slowly on the dark sand, the sand was red, almost seeming that blood was embedded into it. He felt the his spine tingle. He felt a dark force signature. 'Oh this isnt good,' he thought to himself, he never did speak when he didnt feel the need. 'Why would my Old padawan need help, he is quite capable of handling things himself. The Jedi Master drew upon the force, letting it flow through him, he reached out and touched, he felt nothing, no lightside signature. Only the dark and his own. He shook his head.

Making his way to an abandoned Massassi Temple on Yavin IV, he reached out again to follow the darkside signature. He had hoped it would be the left over darkside aura from the Temple. He walked up the long stairs, noticing an unfamiliar symbol on the wall that seemed to be edged in with some type of beam. Shaking his head at the symbol. 'I am near, I know it.' he thought, he continued through the dark temple.

Dark Knight Guntai Haj'ra waited, his task was to kill his master of light. He knew he would do well, his new master had taught him well. He smirked, eyebrow's sharp and arched, "But Master I dont know understand why I must wipe out this Jedi" his tone was questionably arrogant and disrespectful.

Lord Exitium shook his head at the young man, of course he was hardly older then his newly found apprentice. Maybe by a year or so. He chuckled, "You must understand that this Jedi is of great importance to you. You WILL, let him go...Should I have to remove this Jedi from your life I shall do so." Exitium was not afraid to 'harm' his apprentices feelings. He was attempting to harden his apprentice, he would use his apprentice to gain what he wanted and simply be rid of him when his tool became useless.

Dark Knight Guntai Haj'ra sighed, "Yes my lord," he kept his thoughts to himself, not that Exitium was a mind reader, he was indeed particularly skilled in reading people.

Lord Exitium smirked, "You are troubled by this Jedi, you fear to die?" he chuckled, his eyes glowing red and gold as they always had after he embraced the darkside."If anything, you should fear that if you fail, and survive, I shall come after you and finish the Jedi's job," he grinned. His eyes squinted as he glared at his apprentice.

Dark Knight Guntai Haj'ra smirked, "Yes master.." he whispered, he had caught on to his master's 'audible whipser,' making it his own. He immediately felt a lightside force signature, as if a glow torch had been lit in the pitch black tombs of Korriban. "Master, he is here." He whispered in a light tone.

Lord Exitium nodded, "then it is time that-" Exitium felt the lightside force signature as well. Although, his apprentice felt it as well, Exitium's force senses were more highly attuned. "The Jedi is closer then we think. You stay here." He lept up off the ground and landed onto a short stone beam that was directly above a large stone table.

Jedi Master Dai' Kund'aya walked though the halls, his glow torch lit, held in his left hand. 'There is definately a darkside force signature here, it couldnt be Guntai, yet...I cant feel his lightside signature.' he sighed, drawing upon the force as the darkside surrounded him was dangerous as well as it was exhausting. He thought he heard whispers, the voice said, '-ay here,' he felt a rush of power after he heard the whisper. He shook his head, 'this is my imagination. The darkside's tricks, I dont like thi-' he immediately felt out of breath, his glow torch hitting the ground and deactivating, a safety function meant to keep from the torch catching on fire. His body strung within the air, his hands grasping at his neck as if trying to stretch his neck into allowing air to rush through.

Dark Knight Guntai Haj'ra let go to the force to grip his former master, he was taught well. How to manipulate objects...as well as beings, 'telekinesis' was a simple task, it was the constricting and the binding of being's or objects into damage was the difficulty. He felt it come with ease after 2 years of training.

Dark Knight Guntai Haj'ra interrupted his former master, "I was not missing, I left...I left The Great Jedi Order of Hypocrites on Coruscant." he chuckled, gripping the man further.

Lord Exitium, crouched into his assassin stance upon the stone beam. His darkside force signature was masked, due to the Massassi temples residual darkside aura from the past, or what was left of it. He observed his apprentice gripping the Jedi, he grinned. 'Very good, my apprentice, I have taught you well.' he chuckled, 'A shame you are but a tool.'

Jedi Master Dai' Kund'aya's hands moved towards his belt, it was useless to struggle, he decided to play the offense, he gripped his lightsaber, a 'Defender' saber style, igniting it with the force.

Dark Knight Guntai Haj'ra sprang back, igniting his own red blade, 'Kriff' he thought for a moment. He had lost his focus, and the Jedi was left to drop lightly on the ground. He immediately went into his Ataru, form IV lightsaber stance.

Jedi Master Dai' Kund'aya let go to the force to grip his old padawan, pulling him towards himself he threw the Dark Knight following up with a slash to the boy's left arm leaving a deep wound. "You have done this to yourself, " He shouted as he watched his blade cut through the old padawan's flesh.

Dark Knight Guntai Haj'ra shrieked, "No! The jedi did this," he did a sideways misty-flip, his body completely horizontal moving out of range from the Jedi, he returned to his form IV stance.

The two went at it, Guntai had learned much since he left the jedi temple, he was quicker, stronger, and more attuned to the force. His focus was unbelievable yet easily shaken. He couldn't help but try to see if he could spot his master at a certain moment in time as the two were both retreating.

Lord Exitium jumped down as the two were retreating, 'The Jedi has you made', he mind-linked to Guntai, 'It is time that this is finished' he had been observing the fight for a long while. He grew weary of watching the two fight. He noticed his apprentice slipping up. He grinned, as he landed inbetween the two, facing the jedi, he let out a terrible force throw. Watching as the body was thrown meters upon meters into the darkness, "You have failed me, my apprentice" Exitium ignited his own blade, the blade hissed as it flurred through the air, he attacked his apprentice, slashing himin the chest and the left arm, causing the wound in the left arm to grow deeper. He distinguished his lightsaber, smirking. He was gone.

Jedi Master Dai' Kund'aya lay flat on the ground after his devistating force throw. His lungs crushed, his ribs were almost completely shattered, arms spaced out on the floor. His left arm, dislocated, twisted in such a way that his arm looked normal, which comes to show that his arm fully revolved. His right arm stretch above his head as a half 'Y', his right hand still shaking as he gripped his 'Defender' Style lightsaber, he released the grasp of his hilt. The Master's hand stopped shaking, his saber rolled to the dark hooded mans feet.

Dark Jedi Knight Guntai Haj'ra watched has his master was thrown to the ground, the devistating blow to the chest from the force. He had never seen such power. Disigniting his glowing blade, he fell to his knees. His head lowered, a tear flowing down from his blind eye. His emotions filled him, losing control of his emotions, the Dark Knight lost grip of his own blade. The blade in which he so carefully, changed from his green lightsaber crystal, into a red one, fell to the ground. He felt the power, he felt agression, he felt passion for what he had accomplished. Watching the orange and red slashes of heat cooling from his own left arm, a light smoke passed. Then it hit, sorrow...He had slain his master. Kicking both sabers to the side, he ran to his masters aid. He let the darkside flow through him, he had never done so before, his strength and speed gained, eventually within arms reach of his master, he let go to the force, channeling all of his emotions, his passion into his thoughts, transforming them into pure energy, fire..transformed to another form of its own. Lightning, he arched the energy into his masters body, his emotions raging, the lightning's color altered, beginning with a violet color, it changed to a white. He felt his master, his life was on edge,'Could I save him?', he began to dwell on the thought. He closed his eyes, lightning still rushing through his hands. He felt his masters life force returning, then it was gone...'You only made it worse..you murdered your master...twice.' He shook his head, letting the lighting die down.

Jedi Master Dai' Kund'aya's body lay in the same position, slightly moved, his body smoking. He had felt his life return for the moment, he then felt it taken back away from him. Before he left this world, he felt his old padawan's presence, the hate was gone, and he was reedemed. He then left this world...

Jedi Knight Guntai Haj'ra's eye, still running. He felt the power of the eye, dying...'This curse shall be put away' he thought. Still kneeling down to his master, he let go to the force to grip his masters body lightly. Finding a suitable place to lay his master flat, he lightly lowered his masters body. His masters body lay, face up on a large stone object. He position his masters arms and hands. One hand over the other, his masters lightsaber under both hands. Arms facing downward towards his feet. As positioning his masters arms the Jedi Knight heard a crunch, quickly turning his head, he wiped a tear. Running his hand over his masters eye lids, he closed them, a gesture of R.I.P. Removing a glow torch from his own pocket. He activated it, then crushed it. An excessive amount of fluid ran from the glow torch. The fluid then began to surround the masters body, the Knight had used to the force to manipulate the fluid to move around the master. Guntai stepped back, igniting his red blade once more, flurring his saber slowing, barely touching the fluid, he distinguished his blade quickly. Watching as the fluid caught fire. He stared unto his master. "May the force be with you, my Master." 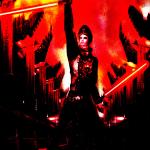