Born to an Echani father and native Naboo mother, I never fitted in very well as my father didn't see me as an echani, my blueish sometimes clear eyes, and my peers around me viewed me as different because of my heritage. My parents shipped me off recently to my aunt on coruscant on the Star cruiser Veritas. As we were passing through the system where Ossus was our cruiser was attacked by Weird looking triangle things that were too fast to see. Engines failing our ship failed to maintain orbit and was caught in Ossus's gravity well. Pulling our ship downward we sped to the ground and impacted into the thick forested area.

When I came to, my vision blurry and focus disoriented. I stumbled through the wreckage. Finding bodies but no survivors I learned I was the only survivor and vanished into the forest. Coming across an old set of ruins in perfect preservation, I avoided all sorts of evil looking men I have only ever heard whispers of. The Sith. I made my way into a large structure with a tower upon it and pausing the massive doors inward found myself in a large library. Feeling safe, I found a crack in the ancient library where I was able to slip through as the only entrance and make myself a makeshift place to stay. Obviously stranded and alone, I sat and wept for a while. Eventually pulling myself together, I slipped out and foraged for food and read books in my spare time.

It was on one of these excursions that I found myself face to face with a particularly evil looking sith figure. Hooded and cloaked he had cold yellow eyes with red rims around them. Spiked black hair fell across the left side of his face from underneath his hood and he had a black breathalyzer with glowing red parts. The noises from the mechanical breathing echoed throughout the room and sent shivers down my spine. I must have startled him with my movements because very recognizable in his right hand was his lightsaber but it was off. I thought I read honest curiosity in his eyes but taking no chances I shook off that thought and fled into the depths of the library.

As I slipped around the corner, I saw him shrug and reclip his saber to his side before returning to his browsing. Curious now I started to shadow him through his excursion in the library. He was randomly pulling books off the shelves copying their content and putting them back. The more I watched him the more something seemed a bit off. However, every time he turned toward me or acknowledged my presence I fled again erring on the side of caution. I caught ghost of a pleasant smile a couple of times when he saw me do this. It was disconcerting to realize he knew where I was the whole time but made no move. It puzzled me. A sith who wouldn't use his power to take advantage of a girl obviously alone and unprotected? It was that fact that put me a bit more on edge. I was trembling with the tension no matter how much i wished it away. Slipping back towards my haven I saw him pull out a Com-Link and start talking into it. When he was done he looked around i think I caught a glimpse of, sadness? Right before he turned and swept out of the area.

It was a few weeks later I tripped up and was found by a group of mandalorians who took me captive and brought me to their camp which they had set up in the bottom of the library, one of the museum's empty and unfinished sections. They were very rough when I fought back and were forced to sedated me and put me under while they deliberate what to do with me. I heard talk of selling. Right before I passed out I prayed to the skies that the masked stranger from the library would come find me. It was my only shot.

Much has happen to her since this happen she worked her way up threw her ranks and become a jedi sage after she made the rank of master after many years of hard work, she has a constant companion at her side that she had saved from an outer rim planet baskran, the hrosma tiger, was feicrc force hunting animal from that planet,

she has sister that she did not know about and have since meet and is her self Jedi of dantoonie order and fights along side her, though it saddens them both have say they had to fight there father who was turned to darkside and was lost to them.

over time threw helping the innocent she and the master kieran have made enemy from the darkside lord corvus, they have fought many times over years,

Known allergies
Blood Eating fungus from Rori
Previous injuries
scars to back
Previous surgeries
None
location of artificial body parts (if any)
None
Midi-chlorian count (force users)
12,661 per cell 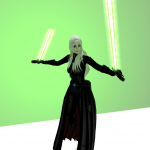